I am, in some ways, a writer. I have always thought of myself that way even though I suppose I am well removed from any professional duties as such. At least for now. I have a degree in screenwriting, which is basically useless, but I do have some little tricks of craft that I know because of classes and I do know all the correct books to use as a guide and the proper formatting programs to use so that I can seem like I am serious about making a career go of the thing. I've tried making that go of the thing in the past and it cratered horribly. (I'm assuming that is an acceptable jargon for running out of money in 9 months and going back to the job I had quit in order to force myself to become a professional writer.)

This picture feels like me right now, with my crippling debt, relatively low income for where I live and for my education level, and my basic fear of just talking to people about anything. I seriously look for ways to write to everybody and avoid opening my mouth and squeaking about any problem or concern that might be roiling my brain. To this end, I've decided to post my recently completed werewolf-western script to blcklist.com. I got the invitation to join the site. I'm not sure if there is any screening involved. I put my name on a form and a couple of hours or a day or two later I got an email invitation to join. I'm not sure if the site is actually any type of window into selling a script. I know that scripts featured on the Black List have been sold, sometimes for really good money, but those were scripts that were already circulating. As an effective shut-in, even the friends I have that could potentially circulate my script more or less don't even know me these days. This is at least half my fault, for the most part. I don't go out (costs money) and I don't invite people over very often (not that anybody is inviting me over or accepts said imaginary invitations). So I'm in this rut and cul-de-sac with a tidal wave close by that might crush me and sweep me away to Kansas. I don't want to be a newspaper man or an errand boy or a retail manager or a salesman. If I'm not able to sustain myself as a writer or a painter I will never feel comfortable in my own skin. 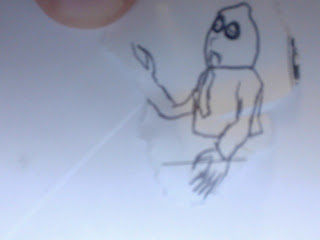 So the point of this is to say that I've got the notion to journal (ouch) my attempts to sell my script, starting with the posting of said werewolf-western on blcklist.com sometime tomorrow. After I get paid. And can afford twenty-five measly dollars. Which is painful in my gut to admit because it is proof that I am a navel-gazing sucker with no obviously marketable skills. Cheerio. Also, I'm basically a child with no concept of savings or thrift. If I ever win the lottery I'll be dead of a drug overdose within a year. Anyway, check back daily to see if I've made progress or given up!
Posted by starkweather at 8:44 PM No comments: