It's really hard to find people who will help you stretch yourself intellectually and artistically but it is really almost impossible to find people that will put you in the moneystream. I don't know how to do it and I don't think I'd recognize those people if I were close to them. I would advise anybody thinking of paying for a class to listen to "producers" talk about how to become successful that the idea of a successful producer stopping what they are doing to go cash in some pesos at the local symposium-holding building by "divulging secrets" is horribly funny. I cry myself to sleep over some of these things. I feel I am a schlub. Have you ever seen the movie Ruben & Ed? I think of myself as Howard Hessman's from that movie, scheming success and not really working for anything. I may have already become that middle-aged loser. 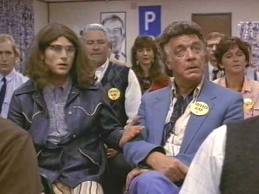 What jarred this into me tonight? I rode the Metro to work and back today. On the train there was a large Mexican man who was very loudly proclaiming the virtues of being an old gangster and being a Christian gangster. He was behind me so I didn't get a good look at him but at some point during his sermon a down-at-the-mouth-seeming 40-something black guy pulled a red clown nose out of his jacket pocket and wore it. He was calling the loud guy a clown but the loud guy didn't see him or comment on him. That guy with the clown nose was a hero in my life for 13 seconds. After I transferred to the bus I ended up in a weird position - the front of the vehicle. A homeless lady with torn pants that showed off quite a bit of skin was near me, the normal old people that ride up in the front of the bus were near me. In the back of the bus there was a skin-head looking white guy that was laid out on the bench at the end of the bus. The bus driver warned him a few times to sit up. I got excited when she stopped the bus to go back and threaten him ("I'll kick you off!"). A fight between a bus driver and a homeless/crazy person is a great way to be entertained. Alas, in spite of her continued antipathy towards him, she let him stay aboard the bus. Which sucks for me because for some reason he ended up sending next to me. He tried to kind of bully me farther into the seat to give himself room. I kind of tensed up and knocked him back towards the aisle a little bit until the people sitting in front of us left and he moved up there. He was wearing a walking boot and kept yelling at the bus driver, "What street is this?" It wasn't great. I hate that guy. That doesn't answer why I got so down about not knowing where to become a beautiful and wealthy butterfly, though, does it? Maybe it does. My head is a swirl.

I will leave this post with this video of a live version of a song from one of my favorite records ever.

Posted by starkweather at 8:07 PM No comments: